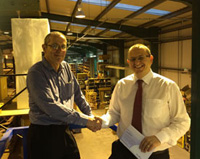 MORE THAN 40 YEARS IN THE JOB FOR TECALEMIT’S DESPATCH CHIEF!

Tecalemit Stores and Despatch Manager Colin Ravensdale has worked for the company since 1973, during which we’ve had three different sites, five Managing Directors, and several recessions!

Colin started work with the company at the age of 19, after a short spell working for the railways and as a landscape gardener.

In those days, apparently, we had our own Job Centre, at the site we then occupied in Forder Valley Road, Plymouth.

Colin simply walked in and was employed as a packer.  He worked his way through the grades, eventually becoming a supervisor with a team of 40, before being appointed to his current position … a mere 15 years ago!!

It’s worth just thinking about that span of time – people who worked for the company for 30 years have been and gone, several of them many years ago!   Some are still friends, even though they’re no longer working for Tecalemit.

Colin has many stories about the company – including the good and the bad.

“At the Belliver site the drains were too narrow and in heavy rain the water gushed up through manhole covers flooding the shop floor and warehouse,” he remembers.   “The current site, with its modern design and facilities, is a world away from that!  It was like moving to another planet when we came here!”

He remembers the recession in the 1990s, when he and colleagues regularly worked seven days a week and pulled all-nighters to get critical orders out to customers. Today’s software-driven systems with their built-in scalability make it much easier to deal with peaks and troughs in the buying cycle.

Nowadays, Colin and his team despatch on average 40 parcels and 3-4 pallets of goods a night, plus a further 15-20 pallets through hauliers. Their highly computerised system is based partly on tablets – something he couldn’t even have dreamt of in 1973.

And retirement?  Hmm, he might consider it if he wins the lottery, he says – otherwise it’s a good few years off!  But he has given it some thought, he revealed … plans include buying a camper van and exploring France!

1973 was a world very different to the modern one and for those customers and employees now in their 20s and 30s it might be challenging to imagine themselves in that environment.

There were no websites, no desktop computers, and no internet … all documentation was done on paper.  But Ceefax made its tentative first appearance, and if you don’t know what that is, Google it!

There were no mobile phones for the public, although on 3 April, executives of Motorola made the first mobile telephone call from handheld subscriber equipment to their collaborators in Bell Labs.

The UK still had a major car industry, and the Northern Ireland conflict was in full flood (100 soldiers died the year before and the mainstream parties tried to reach a political settlement in The Sunningdale Agreement, which ultimately failed).

It wasn’t a great year for the economy but it was a golden year for British TV, with the emergence of programmes that are still fondly remembered (and in some cases still being broadcast).  They included Some Mothers do ‘Ave ‘Em, Last of the Sumer Wine, That’s Life! and Whatever Happened to The Likely Lads?

Are You Being Served? began a regular series following a successful pilot in 1972.  The pilot episode of Open All Hourswas broadcast and the ambitious Ascent of Man underlined the BBC’s supremacy in ‘serious’ broadcasting (Thames Television’s answer was The World at War).  Pat Phoenix (‘Elsie Tanner’) left Corrie after 13 years.  There was no cable or satellite TV, and with less choice and only a handful of Terrestrial broadcasters, audiences into the tens of millions were much more common.

Here’s a flavour of what else happened that year: